Before this assignment, I am embarrassed to say that I had never been active on Twitter. I created an account years ago and then ignored it in favor of other social networks. I started working on our assignment a few weeks ago, sending out tweets to a few celebrities who I thought would make interesting connections, but the silence was deafening. So this week I took a new approach by deleting my old Twitter account and setting up a new one with a fleshed-out profile.

At the same time, I was working on a case study on ridesharing in Austin for my Seminar in Advertising and Public Relations class. While I was recruiting participants through Facebook for a focus group, my plea reached attorney and author Mike Godwin through mutual friends. He told a friend that he had written a paper titled “Catching the Third Wave: A Tale of Two Tech-Policy Battles” for the R Street Institute, a public policy research organization in Washington, D.C.  His paper compared the defeat of the Proposition 1 ridesharing election in Austin to a regulatory defeat suffered by Facebook in India, and it proved to be very useful for my research. I did not personally know Mike Godwin, but we were both University of Texas alums, and he had served as editor of The Daily Texan campus newspaper after I graduated.

In later years, Mike Godwin became famous for the creation of “Godwin’s law,” an Internet adage that claims that as an online discussion grows longer and more heated, regardless of the topic, the probability of  someone comparing someone or something to Hitler increases. His theory got a lot of traction on the Internet, and in 2012 Godwin’s law was added to the Oxford English Dictionary.

I reached out to Godwin on Twitter, praising his paper on ridesharing, and asked him if he had based his research on an analysis of media coverage or if he had also conducted interviews.

In his response, he named a person he had interviewed who we knew in common because she had worked as an advisor at The Daily Texan during both of our tenures there. Surprisingly, she also had taken part in my focus group on ridesharing. (I have deleted her name in the screenshot to keep her anonymous.) I then commented about the connection in his paper between India and Austin, and he responded with a thread of great background information. 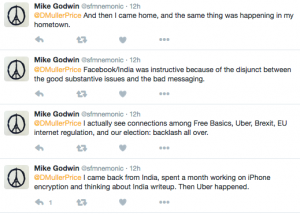 So, while I didn’t hear back from the bigger celebrities I stalked, I was successful in getting interesting feedback on a topic I am currently researching, and I made a personal connection with a notable alum of my alma mater. And, at the same time, I learned how to use Twitter and ended up with a much better profile for the future.

For anyone interested in more information about Mike Godwin, here is an article he wrote in The Washington Post about the birth of Godwin’s law.

December 12 Update: Just went into Twitter and found that he had sent two more tweets to me last week. I think he enjoyed discussing his paper on Uber and Lyft.