A fellow graduate student in one of my other classes presented about the topic of influencers that can be found throughout social media.  We even talked about it a bit in class but it got me thinking about how these influencers can also be viewed as entrepreneurs! Influencers can be seen as ordinary people such as you or myself who have a pretty large following on any of their social media accounts.  As time has passed influencers are starting to pick up companies who are now sending these influencers products to feature in their videos that they might post or on their personal digital media accounts.  One of the ones we will discuss today is the influencer or entrepreneur known as Logan Paul… 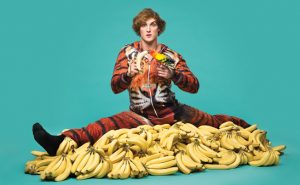 Some of us might of started noticing him awhile ago when he was making funny videos on Facebook or Vine.  You might of thought he was funny or outrageous by doing ridiculous activities in public.  But now his humor and outrageousness is catching the eyes of companies and they are hiring him to help with advertising for their own companies and products.

(I wish the video worked but they have the script in the article. Tried adding a different link to see if that would work)

Even Kim Kardashian attributes her career to digital media and in my eyes she is an entrepreneur.  She created herself through her social media and became widely known for this.  It’s just incredible because many people always bring up what “talent” she has and most of us can agree that there really is nothing but she is smart because she knew how to brand herself through digital media and I think that’s how she attained her money and fortune.  This could also be seen with her sisters in my opinion.

A couple of years ago a guy by the name of Brandon Armstrong started releasing videos of him in his backyard impersonating different professional basketball players. Armstrong began with big name players such as Lebron James and Kobe Bryant and his videos became a hit as he perfectly imitated the mannerisms of the players. He continued his series of videos impersonating and each of them were just as spot on as the first. These videos were such a hit, they began to be featured on Sportscenter and landed him on The Jimmy Kimmel Live show.

All of this started from a set of viral videos. As these viral superstars continue to gain viewers not only does it land them in the national spotlight it, but puts them in position to gain sponsorships. Armstrong has teamed up with New Era for a commercial that capitalizes on his impersonations. He recently released a video of him doing normal daily activities around the house, but did impersonations of how professional football players would complete these simple tasks. New Era is a hat company that sponsored the video and every scene is of him doing impersonations with a different hat on. Not only does this promote the hat, but it promotes Armstrong as a brand in himself. Armstrong has established himself in the internet world and is using his videos, that were once used as entertainment for him and his friends, to get big time endorsements to promote big brands.

Influencers are everywhere in the world and people may think that they just have social media fam but they are getting paid to do things on their accounts and in my eyes that’s how they became entrepreneurs. It’s a totally new idea and concept that is happening but they have the control over what they want to do with it and like the CBS interview stated. They are turning followers into dollars….