The eighth international research conference was the very first conference that I have ever attended. I met new people as well as new professors. One of the professors I meet was Dr. Prisca Ngondo, she was a PR professor. She gave advice about how to be grad student and how that time was precise and it should be used wisely. Before our panel started she talked with me a little about her experience about a conference. Because I was a little nervous, she just talked about how her first time presenting she was nervous.

I also meet with at student, Janice Cho, her topic was about K-Pop music videos. Now if you asked me what K-Pop was, I would say, I had no clue but she explained that K-Pop was  Korea group band music and how they show their music videos.It looks like you will learn something new everyday! Show below is a picture of Janice Cho presenting her topic of K-Pop. 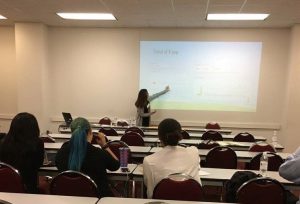 It’s most likely that you would not get a response from a famous person but one comedian did in fact response to my tweet! If you have ever heard of Gabriel Iglesias you know, he is a comedian and featured in some films and TV shows. Even though it was very brief we did discuss about his experience and his “secret” in becoming a comedian.

However, I hardly use Twitter and the reason for that is because once you hashtag with a statement it seems like a fire storm that is about to happen. I felt like in Twitter you can be invisible or you can be noticed by other people by connecting people with a hashtag and people respond back. What I mean by that is that once you place a statement out there: its out there. I had a mixture of emotions to this experience.

One of the emotions that I experience was awesome because I got a response back from one of my favorite comedian and we had a great discuss on his achievements. However, the other experience was sad and frustrated because my tweet caused so many people to be outraged. Read my tweet and see if you would get angry with the statement.

Now it was not the tweet that got people to backlash at me on Twitter but rather the label that I place on him. “Mexican” label is what people felt was to harsh to label Gabriel Iglesias. People tweeted that I needed to do more investigation before I start to label people. Maybe I should have tweeted “Mexican American”? I don’t know, but for a day I was a target for people to comment with rude comments. I used to think that I was invisible in Twitter but after this tweet it seems I’m not invisible any more. LOL!

Yet, this was a good experience to see people get angry for a little thing but I was think about what people say about social media. It is not social media that is bad, but rather the people using social media that are mean and harsh that make it bad. I loved this assignment because I got a good laugh out of it! 🙂 Also, I loved it because I had a conversation with a famous comedian! Below is his very first response back…

This article states, that in  the near future, Internet will change the way we think about technology and the world we live in. There are some many people who are creating new ideas for technology to involve into something better and efficient.

It also states that there will be a “Brave New World” to experience technology in a new way. But there will be obstacles that will change the way we live and work in the world of Internet and it has broken down to how the household will change, how the cities will change, manufacturing changes, vehicles changing, transportation, health care, energy and agriculture. They explain how all of these will change in the near future with Internet on the rise. The years that they predicted seems so far away but it is just around the corner and before you know, we are living in the “Brave New World”.

Twitter is a social media platform for people to express their own feelings but Donald Trump has used Twitter as a way to communication all his harsh words and his feelings for everyone to know.

Yet, who was digital media ethical Donald Trump or News Outlets? In my opinion, people are going to news outlets to receive trustworthy information throughout the election so in reality the news outlets were digital media ethical because people would depend on them in the end to get all the information not based by someone’s hatred to get revenge.

Digital media pretty much created a path for anyone to become a journalist online, but I can tell you that in my small town of Llano, Texas, still thrives on printed newspaper. The Llano News recent launched their online journalism about 2 years ago but it does not get viewed as often. The Llano News, till this day, still runs on printed newspaper and distributed to every company or business. Yet, they do have subscription for people who choose to have the newspaper delivered to their house everyday.

Yet, even though online journalism has not reached this small town, it does not mean that online journalism does not exist in this town. However, I found this blog by Mindy McAdams, explaining the difference of a small town vs a bigger city. She also explains how online journalism is different for each. She states that in a smaller town, you can experience bigger ideas rather than bigger cities and not even expressing your ideas at all.

Now its easy for us to get information at the tip of our fingers and we don’t have to locate the nearest computer because we have it in our hands. Mobile Media has provided so many possibilities to this generation and these possibilities show our experiences in what we can accomplish. One Campaign states that we have reached a ‘tipping point’ in where people can consumer information because we have the desire and the ability to have the information in our hands. 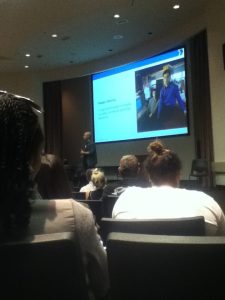 Despite the sprinting and the sweat I collected today, I believe that the workout of the day was worth it. I enjoyed the presentation about Google News Lab. Nick Whitaker, talked about the google tools and how over time we adapted to social media. His advice was that there was no such thing as anxiety but rather excitement and we need to stay uncomfortable about the things we feel passionate about.  He explained that one of his strategies was that it was not the concept of Journalism but rather storytelling. He goes on to explain that storytelling is showing to the public, the story of what’s happening at the moment. Whitaker states that the Google News Lab are data based on trends and how users are searching something that helps journalist and entrepreneurs to change they we we look at technology; and journalist and entrepreneurs are make technology useful based on the data of trends and the information of Google searches. In overall, this presentation was worth getting off work early to really understand how technology is created and how it becomes useful and accessible for the public.

Media plays a huge role in creating social roles because of the various media platforms available for adults and children. Television is the most persuasive form of media of all because of how many people watch TV. This is based on the family homes that own a TV, not including college student that binge watch Netflix. Now Films may be the second form of persuasive media platform because how many movies come each year.

I’m one of the few millions who choose google search instead yahoo but what surprises me the most is that people know that google keep the records of what is typed or said in the search engines but we still choose google instead of yahoo, why? We know that it keeps our records and they are looking at all the activities that we do but with this knowledge we still choose google. I can only give you my thoughts of why i choose google instead of yahoo, everyone has their own opinions. So, for me, google gives me better options when I type in the search engine, it directs me right to what want. It’s  also about the webpage of google. For me it just seems so simple and when  I type in yahoo.com, their webpage seems so overwhelming with all the news information and many more other things going on. Yet, as I type this, I’m also using google chrome because internet explore just is not fast enough and it is a bit slower than google chrome.

Over the course of time, internet has become this personalize social network for people to interact and even meet their soulmate. The internet give us a sense of opportunities to be an individual based on the things we find. However, did we ever think that the internet could let us refine ourselves in a personal way. The article below shows how in this generation, social media has made us a little bit bolder as an individual. But when we’re without the internet we become this shy individual or a different person. Is it because we choose to see what we want to see?