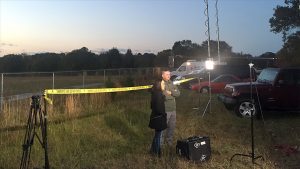 This article is about ABC News staging a shot for a news segment. They attached police tape to two camera tripods and reported from within them for a shot in a story. It gave the impression of a more intense situation. An anonymous source took a photo of the staged incident and posted it online. Instances like these damage a news organization’s credibility. While making for a more dramatic event, which was likely ABC’s intent, when caught it makes them look stupid and desperate for ratings. I have the feeling a rival news organization took the photo and put it online, which is why the source remained anonymous. It makes for an amusing story about the lengths news organizations will go to over-dramatize an event for ratings. Read about the story here.