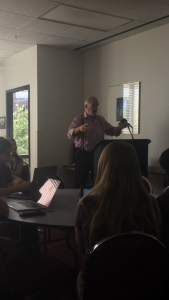 ring Mass Communication Week here at Texas State, I attended a talk led by Bruce Bendinger, the ad man at The Copy Workshop titled “Brand You! Getting Ready to Get a Job in the 21st Century.” His talk drew on the vast array of professional experience he has. He showed us work he has done in the fields of music, film and more. Having acquired so much experience across multiple industries, Bendinger is uniquely equipped to give insight regarding changes in the character and practices in communication industries.

The change he focused on primarily is that corporations have changed. They are no longer, as he described them, “fat.” Fat corporations looked for employees, had clear guidelines for roles and had large staffs. “Lean” corporations, as he told it, are smaller, busier and don’t have time to look for employees in the same way. People who want to work for them often have to go to them and prove their value.

This was the jumping point into his discussion of personal branding. He discussed the importance of maintaining a personal brand in this professional climate and provided tips for doing so, some of which I’ll briefly sum up below:

That’s a pretty great note to end on, yeah?