There has been a lot of finger-pointing since Donald Trump’s election, and many have been pointed at Facebook. A growing number of critics – even in the tech industry – have criticized the social media platform for having a negative influence on the election because it spreads fake news.

While Mark Zuckerberg has argued that Facebook is not to blame, this week news headlines announced that both Facebook and Google have unveiled new policies to fight the growth of fake news.  The idea behind the policies is to hit fake news sites where it hurts by not allowing them to make money through advertising tools.

Here’s a Wired UK story on the new efforts:

And here’s a CNet story about the controversy surrounding fake news and the election:

Hopefully dust from the swirling debate will settle and by next election we won’t feel like this: 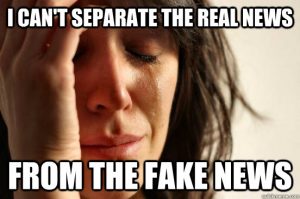 2 thoughts on “The battle against fake news”