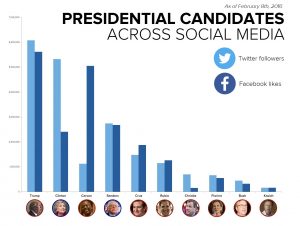 This graphic shows the popularity of the candidates over the social media networks Twitter and Facebook. While this is a graph made in February of this year it turned out to be a good indicator of how the election turned out. Donald Trump’s stats are on the far left of the graph and shows that he had the most number of likes on both social media platforms. Hillary was second with a large number of Twitter followers, but not as nearly much Facebook likes. The graph starts to decrease as it moves to the right where the less popular candidates are located. It’s been established that social media is where a large number of people go to for their news, so it seemed that the popularity of the candidates on these platforms helped during the election. It is no secret that Donald Trump is a star and had a following before he announced his candidacy. In this social media era we live in, this graphic seems to be a good indicator of how this became not only an election, but a popularity contest.

One thought on “Presidential Candidates Across Social Media”