In October I attended a special event at the Belo Center for New Media at The University of Texas featuring Ernesto Londono, who serves on the editorial board of The New York Times. He gave a speech as part of the Mary Alice Davis Distinguished Lecture in Journalism titled “Opinion Writing in the Age of Twitter.” Sixteen journalists sit on the editorial board, and their job is to write the editorials for The New York Times. Londono was surprised when he received an email a little over two years ago asking about his interest in the position. He had amassed impressive experience at The Washington Post, but he didn’t feel like a relatively young reporter from Bogota, Colombia, was really who the Times was seeking. It turns out that the paper wanted to break the mold and bring in new voices to counter the editorial board’s traditional, stodgy image.

In his lecture, Londono gave tips on how opinion writers and journalists can rise above today’s “incessant chatter of opinion” and “never-ending stream of information” on the Internet. He suggested trying to stand out from the crowed by choosing issues to cover that no one is paying attention to yet. His example came from October of 2014, when he chose to write about Cuba relations in an editorial series that began with a piece 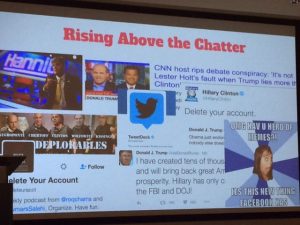 He also spoke about the current crisis facing the news industry – the lack of public trust in the news. He said there is a dire need to rebuild the trust that has eroded in recent years and seems to be at an all-time low. He suggested striving for transparency in reporting because it dispels suspicion and builds trust. For example, Londono traveled to Cuba on a reporting trip to meet with ordinary citizens and government officials while working on the Cuba series. While the editorials published in the Times are written anonymously, he documented his trip in photos and shared them with the public in the hopes that the transparency would build trust in the United States and Cuba as he gathered information on the controversial topic.

In another first for The New York Times, he suggested a series called “Transgender Today” after reading about a transgender woman who had committed suicide. Instead of appearing as though it had moral superiority by publishing an editorial, the paper invited people to share their own stories about being transgender and upload video testimonials. The Times received more than 300 submissions and posted them without editing them. “This is an example of crowdsourcing at its best,” Londono said. “There is something so visceral about letting people tell their own stories.”