As we consider the power of mobile media this week, one of its well-known features has made the headlines. In the last few days, the “check in” feature on Facebook has connected people across the country in support of the Standing Rock tribe members who are protesting the Dakota Access Pipeline in North Dakota. 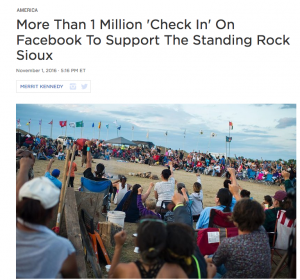 Over the weekend, social media posts claimed that police were using Facebook check-ins to track Standing Rock protestors. They urged people across the country to check in remotely to the protest camp at the Standing Rock Indian Reservation to confuse the police. Although Snopes reported that it is not clear whether or not the police were actually using the tactic, by the evening of November 1 more than 1.5 million Facebook users had “checked in” to Standing Rock.

In our reading for the week, “Mobile media: Coming of age with a big spalsh,” author Ran Wei argues that no medium beats the mobile telephone for its ability to connect people and give them the sense of being together, regardless of their location. As the news this week shows, mobile media brought people together in support of the Standing Rock protestors while also bringing attention to the cause across the country and even internationally.

Here’s the full news story as featured on NPR.