Guys, I was able to have a small convo with a young up and coming entrepreneur from San Antonio, Texas. His name is Jordan McCook. I meet him recently at a radio show release showcase he put together for his new radio show that he just started. He was originally a barber, then he got the feeling that he was to do more with his life so he prayed about it and starting a radio show was bestowed upon his heart. I ask him what’s steps were taken to get his own radio station, and he answer “firstly, brand myself”. Next I asked what would be the steps and guidelines to coming up with that brand, and his reply was “something that comprise the end goal or vision of the company”. Lastly, I asked for any other advice, and he told me “it’s not about who you know.. it’s about who knows you.. don’t compete with anyone ever! Just be the best me I can be”. 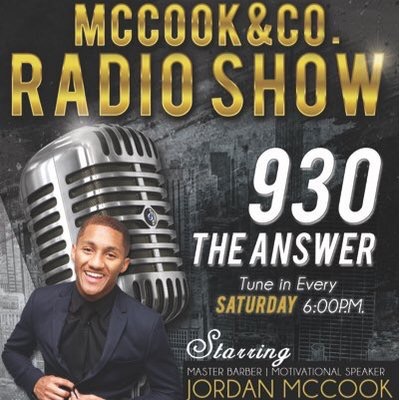 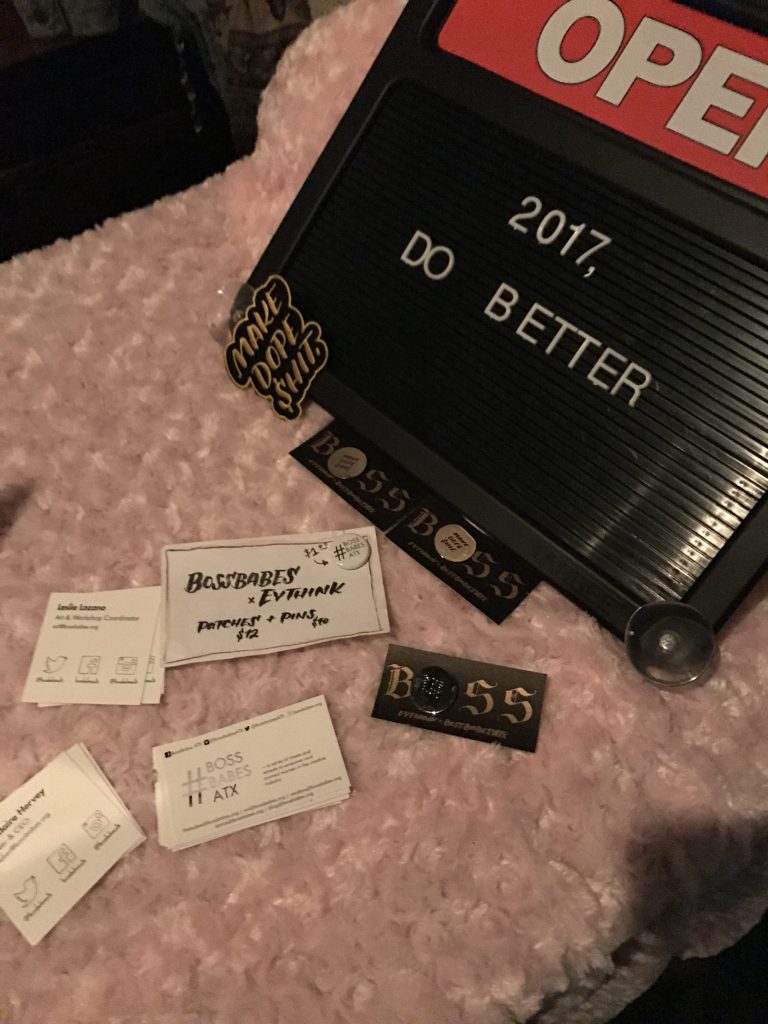 So for my meet up, I went to the last event for #bossbabesatx for 2016. “#bossbabesatx is a non-profit series of meet ups, events, festivals for all self-identifitying women in the creativity industry and the arts”, according to their website. I was excited to be able to attend this meet up because I had been wanting to attend one, but with the semester and work always being so crazy, I was never able to. 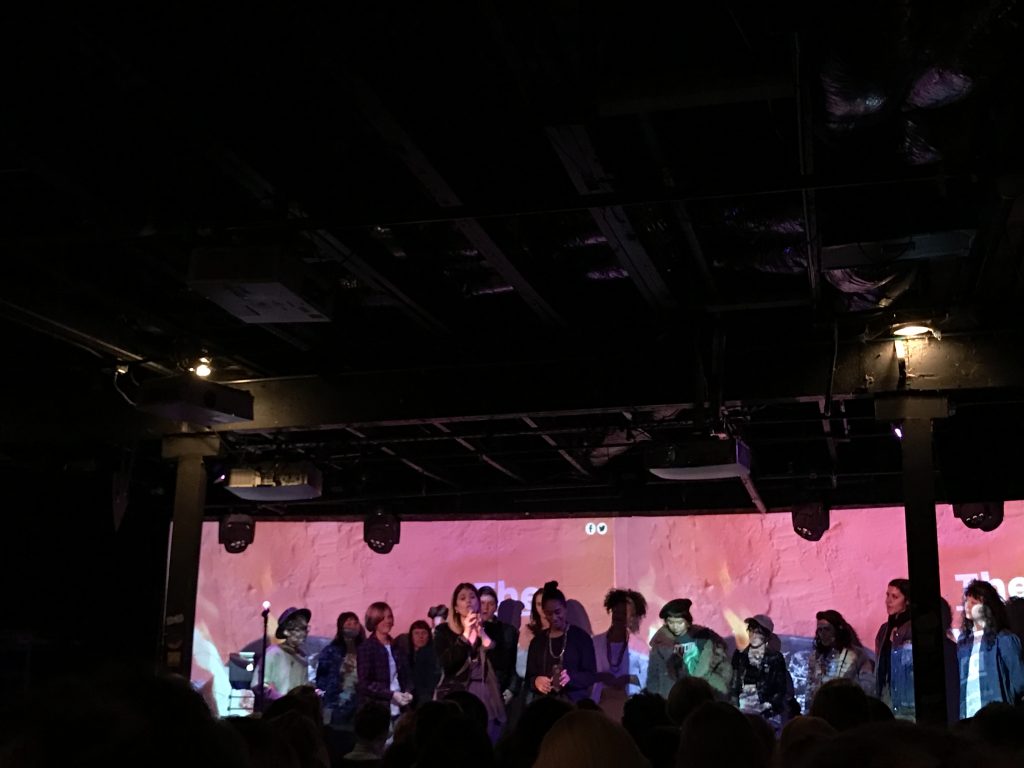 The meet up started off with some time to get to meet new people and network. It was pretty fun! They had a DJ playing some music and there were so many different people from different professions in attendance. Followed by that was some announcements. Fellow professionals from around Austin would announce creative projects they were working on, some informed us they will be looking for interns for next semester, some were asking for collaborations on their projects and so much more. Finally, Jane, one of the founders, honored some people from the community for all the amazing work they have done. They were called the Babes of the Year. Hearing all the achievements from these people was very inspiring and makes me want to work even harder. I can’t wait to be able to go to another one of these meet ups!

Throughout the semester I was reaching out to different sports personalities in effort to get a response. I wasn’t asking about their experiences in mass media, but rather commenting on the talks they were having. Bomani Jones, is an ESPN radio personality who is very involved with his Twitter account even during his show. I like the dynamic this brings because it makes the listener feel apart of the show. I topic about whether or not basketball player Dwight Howard was a hall of fame player came about and I tweeted at him with my response. He then got back to me with a short, but responsive tweet allowing for me to reflect on the conversation a little bit more. The new level of interaction Twitter brings to entertainment of all types adds to the experience because not only can you have mini conversations with TV or radio personalities, but also with their followers who can add some insight to topics you’re interested in.

Today, I just received a reply from a journalist, RJ Marquez, who works for KSAT 12, a news station in San Antonio. He works in the field that I hope to one day transition to. I asked what his advice would for someone who is in his last couple of semesters of grad school and looking to begin a career in journalism. He told me to be willing to start in a small market in order to get my foot in the door. He said small markets will allow to better learn the craft and try different things in the newsroom and gave me the advice to learn how to use equipment and software that fit today’s world. He too is just beginning his career in the field, so I will take the advice he gives seriously and continue reaching out to others.

So I read an article about the future for of digital media and it was stating that these new VR headsets are the new up and coming tech media. I had a discussion in my Mass Comm Public Relations and Advertising class and students in there were stating thar they really didn’t care for the VR tech, just wondering what at you all’s thoughts 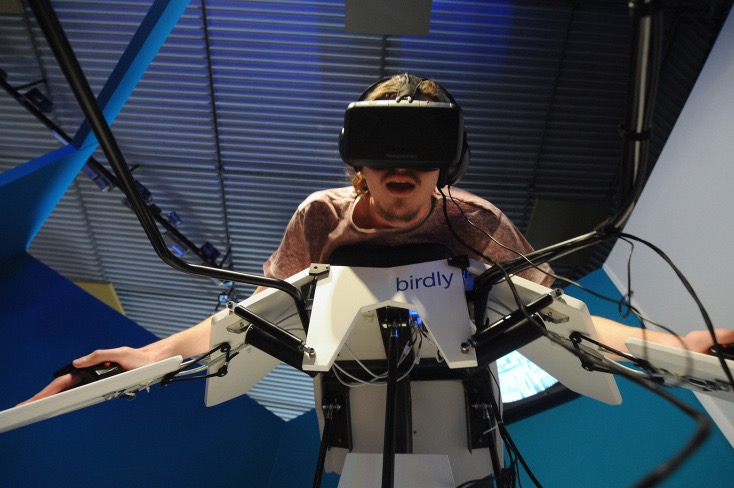 For my last blog post, I thought I would explore a topic tied to the future of digital media and online journalism. This article from Vanity Fair breaks the news about a new venture called Axios from Politico co-founder and former C.E.O. Jim VandeHei and Mike Allen, the founder of its Playbook newsletter.

As part of the PR spin used to announce the new publication, the company says that its mission statement is: “Media is broken—and too often a scam.” It’s hard to argue that journalism isn’t broken right now, bogged down by plummeting revenues, an aura of mistrust, and the epidemic of fake news. The partners argue that online journalism is monopolized by industry giants like The New York Times with outdated technology and advertising models, and the digital media start-ups of the last decade that are based on “just give me a lot of traffic, I swear to God I will find a business model.”

VandeHei describes his new media enterprise as what you would get if the “Economist mated with Twitter.” Although the news venture doesn’t launch until January and the final details are still secret, they have hinted that it will specialize in business, technology, politics, and media trends in short, high-quality news items designed to be shared on Snapchat and Facebook. Some people have theorized that the venture might take its direction from We the People, a news channel on Snapchat.

So do news ventures like Axiom signal the future of journalism? Will it be dominated by headlines and nuggets of news that we absorb by scrolling through social media? It’s food for thought, especially as the growth of social networks seem to show no evidence for slowing down.

So this assignment was a little more difficult than I thought it would be because I tweeted at a lot of people and only two people actually tweeted me back answering my questions. And even with that the answers weren’t very compelling so it was a bit of a whomp whomp moment.  Although the replies weren’t that AMAZING I will still shocked on the status of the people and accounts that actually tweeted me back.

I wanted to tweet at people who have a higher status in the advertising world who might be able to answer some questions that I have because that is the industry I pray and hope to be apart of in the future.  As some of you may know I am struggling a bit to get my foot in the door so I thought that maybe some of these experts could answer some questions that I had off the top of my head!

The first tweet I got a reply back from was from a man named Tim Nudd who is the creative editor at Adweek and AdFreak.  He was actually the first one to tweet me back quite quickly after I tweeted him.  I first tweeted at him asking “how did you get your foot in the door with the advertising industry?” and he replied back saying “fairly randomly got a job at Adweek!”  Not necessarily the reply I was wanting per say because I feel like you have to have some sort of background to get a job at Adweek. I mean come on… it’s Adweek! A bunch of people use this site to look up the latest advertising campaigns.

My second twitter account that I got a reply back from was from McGarrah Jessee which is a well known advertising agency in Austin Texas.  I believe they are one of the top 5 advertising agencies here in Austin and of course I always apply for positions that they post and wanted to see if I could get a comment back from them on “how do y’all stay updated on what’s the next new wave of advertising?”  And of course again the reply back wasn’t that amazing but hey at least I got a response back…right?  The answer to my tweet was ” we have 150 employees who are exploring that every day.”  So I guess everyone in the company basically works on keeping up with what is up and coming for the new digital media that keeps coming out and keeping us sidetracked with its innovative ideas.

I thought this assignment was interesting and fun because I have never had an assignment like this before and shows me how we can use social media in different aspects such as us using this for a more educational moment and not for us to just put our thoughts and opinions out there.  I definitely think that I will use this tool more in the future for if I ever need to get in touch with someone because you never know who might tweet you back!

When it comes to media effect, I think I when I see a very well-thought out commercial, I almost cry. I don’t what it is, but I am an emotional creature when it comes to creativity, visuals and the message. One commercial that evoked emotion out of me would have to be Derrick Rose’s Powerade commercial with the late Tupac Shakur’s powerful message from The Rose That Grew From Concrete book. Because I am a big Tupac fan, that alone evoked emotion from me and comparing my life to how I also feel that I am a rose that grew from concrete.

I do believe that women are not thoroughly trained when it comes to learning technology. I say this because I remember growing up and basically learning that boys excelled and therefore were/are more superior than girls in math and science, whereas girls are superior in reading and writing. To hear a woman excel in technology is still difficult for me to believe and I get really excited because it’s rare. But I feel to eliminate the gender gap, the educational system should push more women to pursue careers in technology by promoting it through grade school and incorporating programs specified for girls to advance. This will probably end the “girls aren’t as good in math and science” conversation that I still hear today. 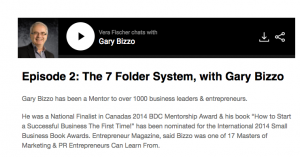 This semester I have spent quite a bit of time reaching out to random people, via Twitter, to be a guest on my completely unknown podcast show, System Execution.

Here’s what I do:

I look at all of the folks that have followed me that are new.

I always reply back with “Thanks for the follow!” for all of them.

If they appear to be a potential guest, I reply with the following: “Thanks for the follow! We’re launching a podcast series on system execution and would love for you to be a guest. DM if interested.”

OR
“Thanks for the follow! We’re launching a podcast series on processes and systems execution. Would love for you to be a guest. DM if interested.”

I have gotten @garybizzo to respond and be my guest – he has 478,000 followers. Also @alanpittmd agreed to be on my show. For every 12-14 invites, I’ll get one or two that agree to be on the show.