Many of the presenters from the symposium touched on some great concepts, but the presenter I found myself enjoying the most was Juan Sanchez from Spain. It was not just because of his accent although it is certainly a hook. But during his presentation he said “we are trying to give them a media that can be related with…we don’t get the money and run. We are building a community.”

I felt that what he said really resonated with a lot of things we’ve heard from the speakers that have visited in terms of audience engagement. People want to find an outlet that they can relate to so they can feel that connection. That is what will keep them coming back. If people feel they are being treated as merely ATM’s then it creates a detachment from the source and a loss in community. Sanchez emphasized the fact that they were given the people of Spain what they needed and played on that political demand. He found the source and aimed straight for it. Instead of them making money and copping out, they continued to play on that demand and become a valuable entity to their market as most businesses aspire to do.

Shannan Bowen is the editorial media strategist over at McClatchy; an all-star company that offers marketing and digital media solutions as well as award-winning journalism based out of California.

Bowen received her bachelors degree from the University of North Carolina Chapel Hill before continuing on to pursue her master’s degree in media entrepreneurship at American University.

Bowen has previously held positions at Atlantic Media Strategies, The Hill newspaper, The Florida Times Union, Wilmington Star News among others before getting to her current position. Bowen has experience in reporting, investigative editing, and audience development.

Amanda Zamora is in charge of audience growth and engagement over at the Texas Tribune. She has been in this position since 2016 and has quite a few years of experience (13 to be exact) under her belt. Before Zamora joined the Tribune, she held positions at The Washington Post, Investigative Fund, ProPublica, and one of my favorites, The Huffington Post. After graduating from the University of Texas at Austin, this Houstonite got her first steps in at the Austin American-Statesman beginning her career.

The Texas Tribune dedicated special article to Zamora deeming her “best-in-our-business” in regards to her new title as chief audience officer. Aside from her career, Zamora has also spent some time teaching as an adjunct professor of graduate journalism at Columbia University and social analytics at the Knight Center for Journalism in the Americas.

Zamora is sure to bring quite the insight.

What was it about the Tribune that drew you all the way back to Texas from the Washington Post?

What are the key skills/knowledge to have when dealing with audience engagement?

Vera Fischer is the reigning CEO and President of Austin-based marketing firm, 97° West. Fischer has been running the firm ever since it’s opening in 2004 and has continued to see steady progress over the past decade. Fischer has previously worked for GSD&M with clients such as Krispy Kreme, Houston Rockets, and SeaWorld just to name a few. DzThe Think Tank.dz was another company where Vera honed her experience while working with the at the time newly established Preferred Accounts Division for the Dell launch.

Fischer also runs a podcast alongside her firm titled “System Execution” discussing the executions of successful businesses. This podcast is worth mention because it makes Fischer the first woman to host a podcast about business systems and processes.

Tim Levy is the CEO of the Tim Levy and Associates Strategic Marketing Agency.

Levy was raised in Australia and went to college at the University of New South Wales. Ever since Levy was a child he had been interested in technology, particularly with Apple, courtesy of his parents. Levy was also a lecturer for the computer science program at his university until he then received his degree. Eventually merging his interest in technology and communications led him to Silicone Valley where he became interested in animatronics.

Levy has been exposed to large tech and communication companies since his younger which has ultimately led the establishment of his own. His company already has ties with multinational companies and various CEO’s. Levy’s company offers a multitude of business marketing practices and has even written quite a few books including The Entrepreneurial Handbook.

It’s funny that the Forbes article mentioned the battery on the iPhone 6 since one of they features listed on the iPhone 7 is that there is 1-2 hours of more batter life than the previous model. So Apple was able to compromise in both areas of functionality and design, not in terms of battery life only, but also with a new sleeker design. The thing with Apple, though, is that they are already established and credible so people will still buy it even if multiple components of the product is being compromised.

I hate to say this, but I think design plays a bigger role than functionality nowadays. For instance, one of those old school Nokia’s makes calls, can text, and has a battery life that can outlast my phone by more than enough days. But am I going to go for a Nokia? Absolutely not, because the look of the Samsung Galaxy and the Apple iPhone is way more pleasing and allows be to be engaged in things that I don’t necessarily need. But at the same time, functionality is relative to a person’s life. A Nokia may be perfectly suitable for someone of only needs to talk and text, however, these days it is quite unlikely.

2) Has design influenced a purchasing decision for you? Or is something high on your wish list because of design?

Design has by far influenced many of my purchasing decisions. You can have the most functional device ever but if the interface and product look like trash then you won’t see me buying it. Recently I switched and iPhone 7+ because I wanted to try it out (seeing as it is my very first iPhone), however, I quickly noticed that my Galaxy 7 which I had previously was far more functional than the iPhone 7+ but that I acknowledge the design of the iPhone much more which was Steve Jobs’ revolutionary forte. Although I like the iPhone 7+ design a bit more, the Galaxy 7 still has a nice and sleek design and when you add the functionality, it just makes it better overall in the long run. Who knows, maybe I just haven’t gotten used to my iPhone enough yet.

Jeff Wilson is the CEO of KASITA, a company dedicated to showing the benefits of minimalist living. This Texas State and Harvard alum lived in a dumpster (literally) for a year reaping the benefits of minimalist living which ultimately led to the creation of KASITA alongside Taylor Wilson. Jeff was able to turn a 33 sq ft dumpster into a sustainable living microunit. Since this social experiment, Jeff has been able to successfully expand the KASITA brand and has received recognition from The Washington Post, The Atlantic, and even The New York Times.

Aside from his success with microunits, Wilson has also received the UT Regents System’s Outstand Teaching Award, loves to travel and has been to over 70 countries.

So this week while were in Korea, we noticed a number of digital innovations.

We had the pleasure of visiting the SMTOWN COEX Artium (yes, it’s spelled like that) and we were blessed by the gods to experience their surround viewing theater. Unfortunately photos of the actual theater itself were prohibited. The theater gives the ultimate concert experience without even being there. The surround viweing allows multiple angles of the artist as well as a premium sound systems that is way better than any theater that I have been to. On that particular day they happened to playing the concert of one of my favorite artists, EXO and their EXO’luxion #2 concert. To say I was stunned is an understatement.

On top of that, the SMTOWN Artium also offers a holographic musical for people to experience as well from the comfort of their own seat. Though the artists aren’t physically there, it is enjoyable all the same. If anyone has a chance to go to South Korea, then this theater is definitely a must.

Anna Tauzin is the Vice President of marketing and innovation at the Texas Restaurant Association and has been since Dec 2016. Prior to her current position, Tauzin was formerly the Senior Marketing over at the National Restaurant Association. In these positions, Tauzin has helped build consumer relationship as well as develop and manage marketing strategies.

During her time at Texas State, Tauzin was an undergraduate teaching assistant for web designs and online journalism classes. She has been on the advisory board for SXSW, helped with communications and advertising for the Texas Medical Liability Trust, and a graduate assistant coordinating social media outreach for J-Lab among many other positions.

How do you adapt to so many changing work environments? For example, how did your work with TMLT help prepare you to work for the Texas Restaurant Association?

How did your time at Texas State prepare you for your career choice?

For my Twitter assignment I reached out to Bitch Media writer and Women Who Submit blogger Stephanie Abraham (@AbrahamSteph). Stephanie has many works related to feminism and women in writing so I thought she would be a great person to reach out to.

Seeing as her work is always so strong and detailed, I asked her for some writing tips and she linked me to a post she had written on her Women Who Submit blog. The article was about how to “declutter” your writing and only include what really needs to be there as well as some other good tips. I highly recommend giving it a read! 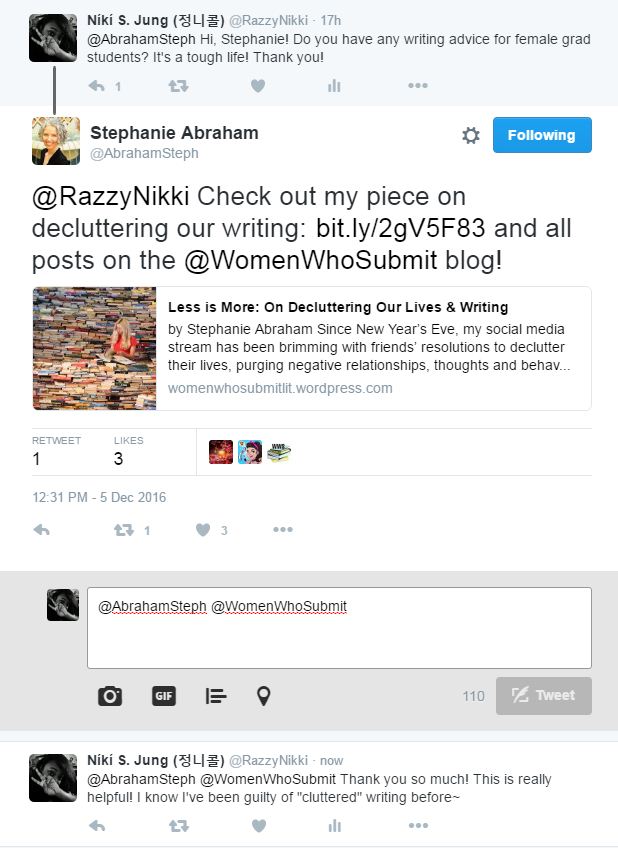