Watching the live stream that we were directed to was an interesting experience. The clip was full of speakers providing valuable perspective on issues facing journalists across the globe. Most interesting to me was Janine Warner of Sembra Media talking about the recent studies her organization has done in Latin American journalistic contexts.

Her discussion was striking because it gave me a new perspective on the value of digitally native, entrepreneurial, independent-minded news organization in fostering a democratic journalistic culture. She discussed why more traditional news organizations do not always break controversial stories. Lack of resources and government pressure/interference are both among them. These independent organizations, however, evade these concerns and break the controversial stories. I knew this to be true, but what she said next opened my eyes.

Once these stories are broken by independent organizations, they are picked up by mainstream news outlets both in their home country and beyond. In this way, independent news outlets liberate traditional ones because once something is out there and becomes news it must be reported on; it can’t be ignored. Thus, even if these outlets can’t break controversial items, they are empowered to bring exposure to them because of the work of independent organizations. This was a very provocative line of thought that I am glad to have encountered.

Amanda Zamora is a University of Texas alumni who just can’t stay away from her alma matter’s state. She got her start at an Austin institution, the Austin-American Statesman, working as an editorial assistant and reporter. From there, she transitioned into a variety of roles across publications with a huge national recognition: The Washington Post and The Huffington Post. She is a founding member of the Huffington Post Investigative Fund, an initiative created to fund investigative journalism that produces journalism with an open-source, publishable by all ethos.

More recently, she has focused her professional efforts on engaging audiences. She has stepped into multiple social media roles, including time in this capacity at both The Washington Post and ProPublica. Currently, she is the Chief Audience Officer at The Texas Tribune. As an audience engager, Zamora prioritizes making sure that engaged consumers of journalism know they are appreciated, getting the public involved in journalism and finding people with the right perspective and expertise to enable journalists to tell stories correctly.

In a very exciting turn of events, we have the opportunity to hear from one of our own! Vera Fischer is a graduate of Texas State University (BA in journalism, advertising and business administration in 1991) and has since returned to the graduate program in School of Journalism and Mass Communication (SJMC), where she is currently wrapping up an MA. The time between these endeavors has been filled with success across several roles in the marketing world.

Fischer is German-born, but Austin-bred (at least professionally!). She has held marketing positions at several Austin-based agencies, including GSD&M, T3 and the Olson Group. Her success has earned her a position on the advisory council for the SJMC.

The greatest culmination of her success, however, has been in her role as the founder and president of 97˚ West, a proudly Austin-based marketing agency. She founded the agency in 2004 and in the years since it has become an internationally-recognized organization that has been awarded by the Daveys and ranked among the top agencies in the nation. As an outgrowth of the organization, a start-up incubator has been established under the 97˚ umbrella.

Fischer is also the host of of the System Execution Podcast. Check it out to here the insights and stories of a home-grown success story.

Tom Levy is an Australian export that Austin managed to wrangle away from Silicon Valley. In each of these places, he has managed to make his name.

As a child in Sydney, his hometown, he spent a lot of his time absorbed by an Apple computer. The detail that it was Apple is important because he, like the company itself, came to be invested in both the technological/practical and the creative. He, in fact, viewed technology as the ultimate creative tool.

Levy received his college education in computer science while bolstering his education with the executive level connections his father’s professional career afforded them. His passions led him to positions dealing with the media content for major corporations, McDonald’s included. Eventually he wound up in California where he did art direction for giant brands like HP through an agency and began consulting clients back in Australia.

His creative interests and ambitions were later pushed to the forefront and his resume expanded to included stand-up comedy, which led to CDs, books and a television program.

Unsurprisingly, his winding, diverse career path has proven intriguing for many. It also, handily, provides a source of inspiration. These facts have fueled the next move: inspirational speaker.

In the end my questions are…

I think that attempting to categorize design and function as more or less important than one another is not a particularly productive endeavor. A more fruitful question, I believe, is when is one more appropriate to prioritize than the other. It is also true that creating one product might entail making a decision between privileging design or function literally hundreds of times.

From a corporate standpoint, the answer to the question of which virtue is more important is simple: which trait will be more equipped to set this product apart from other products on the market? As a brand or product manager, I would be willing to make a sacrifice in one department if I was able to point to something that is provided to a consumer that they cannot get anywhere else. And while that may seem like a bias in favor of function, it isn’t. Design absolutely provides customers with benefits. Some make a product more enjoyable to use because it is beautiful to look at, and some provide cultural or interpersonal benefits; a beautiful product makes people jealous and can signify your membership or participation in a cultural elite.

As a consumer, design has definitely influenced purchases. When American Life was released, there was a deluxe edition which included nothing more than more elaborate packaging. No additional music. Just some post-cards and more beautiful artwork. But I bought it. I was drawn to what was attractive, not just what would get me the music, which is what I was, ostensibly, buying.

Anna Tauzin is the current Vice President of Marketing and Innovation for the Texas Restaurant Association. She recently stepped into this role with a wide and impressive range of experience under her belt.

She entered the restaurant industry in 2011, as a web communications specialist for the National Restaurant Association. She eventually transitioned into a senior management role before taking her current position. Tauzin is a digital pro, having previously worked in social media and web design.

She is also quite passionate about journalism; her educational background includes completing an MA in journalism and public affairs at American University. On this front, she is particularly interested in the development of innovative ideas to ensure that journalistic work holds value for traditionally under-served communities.

For her undergraduate education, Tauzin attended Texas State University. She majored in political science and mass communication. While enrolled she served as an undergraduate teaching assistant. She is proud of her time in Texas and maintained ties to the Austin area by serving as a member of the advisory board for the SXSW Interactive festival.

2. You have worked in social media, but you now hold a very high-ranking position. One of the concerns about social media work is that it only lends itself to lateral, not vertical, moves. What do you say to this, and how did you make your transition?

For my Twitter conversation assignment I reached out to Ragan Fox, a professor of communication at California State University, Long Beach and former contestant on Big Brother. I chose him because he is an academic in my field who has experienced the celebrification process through a stint on reality television. I asked him for his insights on fame because I wanted to hear someone with a similar academic background to me supplemented with first-hand experience talk about these issues. I have included a screen grab of his responses to me below! 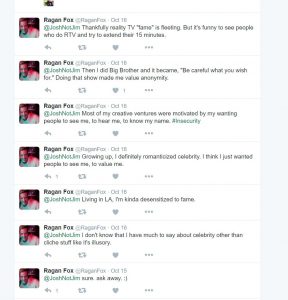 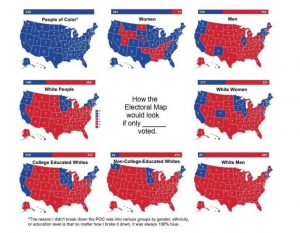 The picture above is a bit fuzzy, but you can see it much more clearly here.

It is a map made briefly before the election that visualized what the outcome would be if only particular groups of people voted. I think this is an incredibly powerful piece of data visualization. It shows, first and foremost, what a divided country we currently live in. Patriarchy and racism are thriving at the same as the resistance is making its voice heard. What upsets me the most about this visualization, however, is learning that white women overwhelmingly supported a Trump presidency. It is something like devastating that a man who has brazenly bragged about sexual assault can win the votes of so many women. This use of data shows us we have a problem.

The first reading this week hit on an interesting development in news that the web web has allowed for: aggregators that present web-searchers with a variety of content from which they can cherry-pick. The other readings did not touch on this as much, but it is an interesting subject that resonated with me in my relationship to the news. 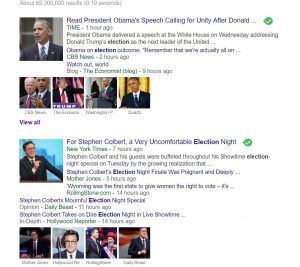 I don’t have any legitimate brand loyalty when it comes to news. I mean, I like Slate and Salon, and Vox always has really fascinating articles but I rarely seek these sites out. The articles come to me from social feeds. If I’m dying to know about a topic I run a Google news search and read the headlines that are most provocative and most in line with my convictions. Why stick to one paper when I have what you can see in the image to your left?

I have often wondered over the past few years if there is business potential in news aggregation/curation services. Would you pay for someone who knows your interests, political leanings, how many opposing viewpoints you want to hear and other considerations to curate your news for you? To cobble together a customized newspaper of sorts? I might.

Anybody wanna start a business with me?

I don’t know how to answer these questions!

They are, to be honest, classic chicken-or-egg questions. What’s a more important innovation, electricity or the iPhone? The law or the internet? How can we answer questions like this? I’m declining! 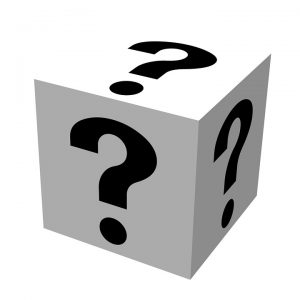 What I am interested in, however, is Web 3.0. What is particularly intriguing is the ways in which the repeated privacy concerns and other controversial issues that surround web use are so brazenly ignored by so many. As we move into a world where we no longer just have the option to do things in new media contexts, but important, integral-to-life operations originate and do not migrate from these spaces what are we to do? Is there a way to resist that without becoming an obsolete human being? Are we digging the hole too deep to be able to escape from it even if we want to one day? Is the just the arc of humanity?